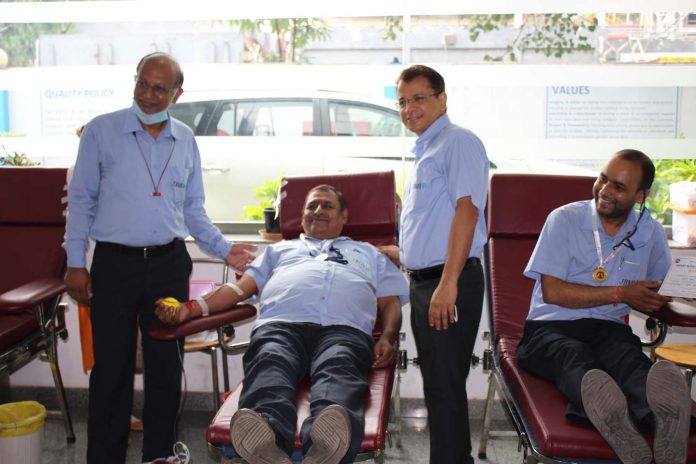 WHY branded drugs cost more than their generic counterparts?

The 3rd Wave, if at all hits anytime in near future, it will be insignificant compared to 2nd wave: Experts at a Panel Discussion

The event was graced by Mr. Deepak Saharan, IPS, Deputy Commissioner of Police, Gurugram west, who was also the Chief Guest of the event. On the occasion of the 75th Independence Day of India, JBM Group had signed anMoU with the Indian Red Cross Society to conduct 25 blood donation camps across its plants pan India this year. Each blood donation camptargets a minimum of 150 units per camp.

Today’s event witnessed enthusiastic participation from JBM Group’s employees, their families and friends, who came forward to contribute to this noble cause. Each donor went through detailed medical screening and blood investigations like testing for Haemoglobin, blood group, weight measurement, etc. before blood donation. The camp successfully created awareness about blood donation, its need and social responsibility among different stakeholders of the society.

Thalassemia is a serious inherited blood disorder. A child suffering from such a disease requires one unit of blood every two weeks. Survival of a Thalassemia major depends upon repeated life-long blood transfusions and iron chelation. As red blood cell transfusion is the most common treatment, the blood banks play a pivotal role in this. Employees of JBM Group and their families have vowed to participate in these camps and donate blood to support the cause and help these children.

As an essential part of the JBM Group’s value ecosystem, the organisation looks forward to maintaining the highest standards towards enhancing the health and safety of its employees and communities as well as preserving and protecting the environment. The group executes a large gamut of activities through its corporate social responsibility arm – Neel Foundation. The organization believes in enriching the quality of life of the community and prevails to preserve its ecological balance as well as its cultural heritage.